The WEDO product is focused on primary school age kids and allows them build and control simple robots.  It is an introduction to basic logic.

The mindstorm robotic products take this a step on, allowing students to build complex functioning robots with a whole range of sensors.  This is aimed at the 11+ age group and provides a really comprehensive control environment.

On the modeling side the LEGO technics introduces all the concepts of gears, pulleys and levers and axles to the creative child.  This product has inspired children for many years. 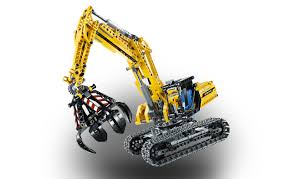 This is based on rods and connective units.  It has become popular as an alternative to LEGO.  The rod system of construction miore closely mimics real construction techniques.  This allows some rather wonderful constructions as shown below:

The automation options exist but are not as developed as LEGO. However Knex has an active educational department and have a range of products focused schools:

The Bioloid robots are an exciting venture into highly articulate human like robots.  They have a range of products ranging from medium to high cost.  The construction techniques are essentially simple with a visual based interface.  Here are a few shots of their products.

This product is equivalent to LEGO Mindstorm EV and retails at $349.

One of the oldest construction systems in the business is Meccano.  It is based around nuts/bolts and strips of metal.  In that sense it does mimic construction very closely.  However the level of automation and educational development is limited  and one cannot help get the feeling that the product is get insufficient development.  The use of nuts and bolts also raises questions of dexterity for younger children.

These are clickable cubes which have either a drive function, sensing function or thinking function.  You can build robots within seconds using these little creatures.  It is a great way to introduce the principles of robots.

The educator pack retails out at $999 and is a really brilliant primer if you can afford it.

Moss magnetic robots are an extension on Cublets and will roll out in feb 2014.  They will be quicker to build than the LEGO EV but will have more control capability.  The online data sensors can direct feed into apps which can add a whole new way of interacting with the robots. For robot fanatics this an important step forward.  However the educational learning may be reduced by the shear ease at which you put the robots together.  Time will tell.

This is a construction system based around magnets which clicks together to make construction objects.  It has no motorisation or automation functions.

Maplin as an electronic supplier has a large range of great automation products which cna be built into excellent lessons:

Fischer Technics has been in the educational construction game a very long time.  Arguably they were the first company to bring in automation in the 1980s.  They have large offering of models and automated machines.  It is fair to say that there automation focuses more on the industrial applications and less on fun

This was brought out as a robot in the 1980s and shows that basic programmable robots have been out there for donkey’s years.  This little to has been given a new face lift and can now be controlled by computer or smart phone.  It comes in two different formats: